What a Way to Start a New Year

Yep, I lied.  I said no more reading challenges yet, as I was reading JLSHall's blog, I learned of the Pre-1960 Classic Children's Books Reading Challenge and I was, well, challenged.  I love children's books, especially the children's books of my childhood.  I have quite a few to choose from and I have no idea where I will start -- more on that later.

So, if anybody would like to join Joy and me as we embark on this challenge, you can find the rules here.  So now I have to decide -- Bobbsey Twins?  Nancy Drew?  Honey Bunch?  Blue Willow or Strawberry Girl?  So many choices and a bit disturbing that I have so many in my personal library! I guess I am a child at heart so I should enjoy this challenge.

I didn't stay up last night to ring in the new year.  I tried to go to bed early but I got involved in watching the latest episode of "Sister Wives" which I had DVR'd.  I am not sure why I watch that program from time to time but right now I am interested in the houses they are building and completely in awe of how the husband affords to keep four families -- and drive really nice cars! At any rate, I hit the sack about 11:30, fell asleep, and woke up about fifteen minutes later itching.  I have a dry skin issue in the summer and the winter and it really drives me crazy sometimes.  I know, TMI, but while awake, I heard one, lonely little firecracker.  I didn't look outside to see if I could see more.  I just went back to bed hoping I could get back to sleep.  I did and the rest of the night was uneventful.

I hope the first day of the new year is going to be nice as the last several have not been.  Over the last two weeks we have seen unseasonably warm temps, cold temps, rain, sleet, snow, wind, hail and very little sun.  I realize this is Texas and we are well known for our variable weather but this is sort of ridiculous.  We have needed the rain badly so it was welcomed especially with everybody off work but now we need a little normalcy.  The thing that was so good about yesterday, however, was that with the rain, the cedar pollen was grounded and almost not on the chart at all!!! What a nice reprieve.  However, it is back up into the med-high range and I have to go grocery shopping.  Bummer.

The book that I am starting out the year with is one I got as a Christmas gift from Hubs. 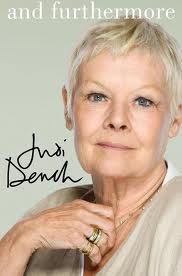 I have always, always been a big fan of Judi Dench and have enjoyed seeing her on tv and in movies and have always found her to be such a class act.  If you want to analyze her, it isn't hard to see that she doesn't fit the mold of a typical American actress or celebrity ( I don't think we have many great actresses here anymore -- Meryl Streep is our greatest right now, I think).  She isn't tall, she isn't exotic and she isn't outrageous  I recently watched a you tube video of Dench on a comedy show being "interviewed" by the comedic host -- I am not familiar with who it was as he was British and it was in the 60's and we didn't have much access to British media back then.  She was very Mia Farrow-ish at the time -- small, blond with her signature pixie hair cut and dressed very well -- gorgeous and modest dress.  It was clear she was a stage actress rather than a film actress and she was very on top of her  game.  Her confidence, her comedic timing and her appearance was just so refreshing.  She exudes a sense of confidence and, at the same time, a vulnerability that makes her seem to real to me -- and probably approachable.  I like her enough to have copied her hairstyle!  I am about a quarter of the way through the book and I am totally enjoying the stories she is relating about her time at Old Vic and all the antics of her peers.  It takes me back to a time that is very dear to my heart -- my childhood and teenagehood and it is so interesting to see that time from another point of view much different than my own.

My New Years Day is going to be spent getting back in the groove.  It has been a very relaxing Christmas vacation, despite being sick.  I need to catch up on laundry, grocery shop, finally cook dinner again and try to get back to my usual routine.  The one thing we are going to have to do today is try to deal with our new issue -- ants.  We have ants all over the house and we don't know why.  I guess I will spend some time today trying to figure out a natural solution to the problem -- I have been bitten so many times now and I am a little tired of it.  So, New Year, new challenge -- who knew it would be such an annoying one!