Today is the 46th anniversary of the passing of my grandfather, James William Davis. 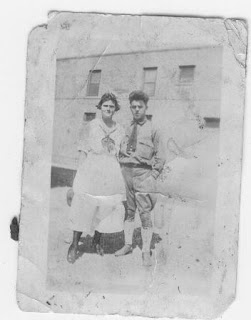 My grandfather was born in 1896 in Scranton, Pennsylvania to James W. Davies and Dinah Webb Davies.  He was one of twelve children born to the couple and the second born in the United States.  James Sr. and Dinah immigrated to Pennsylvania in 1889 or 90 (sources vary) with three children in tow, at least three left buried in Wales and then went on to have several more here.

Their name was "Davies" but when starting school, the "sister school" as he called it (the neighborhood Catholic school, probably St. Ann's), his name was inadvertently spelled  "Davis" and he remained a "Davis" for evermore.

He was not a large man.  He stood 5'4" in his prime and he still wore a boys size shoe at his death.  His height shouldn't have been a surprise to anybody as his mother could stand upright under his outstretched arm.  Of his own four children, the tallest grew to be 5'6".

What he lacked in stature he made up for in spirit -- as did all of his children.  A feisty bunch they were.  Many people said my grandfather was mean and I have to admit that I can see where he would come across that way but he was never mean to me.  However, if you slammed the back screen door too many times he would get annoyed and let you know not to do it again but mean?  No.

In fact, I adored him.  I always felt very secure with him.  There were many times when I was hurt or sick that he was the one to haul me to the doctor's office.  There were times when I needed something for school and he was the one that would make it.  I remember one time we were in the yard picking up pecans  -- well, he was picking them up and I was toddling behind him pushing pecans back into the ground -- those little trees were still coming up when he passed away.

One of my favorite things to do with him was eat.  They had a small kitchen with a little drop-leaf table and we would eat together.  My mom and I went to their house almost daily -- they just lived on the next street (you could see their house from our backyard) and we would eat pork and beans, or fried potatoes but the best thing was the Welsh rarebit.  He didn't put beer in it but he had a little tiny pan that he would melt that cheese in and spread it on toast and it was delightful! And tea and toast.  Always tea and toast.

I wish that I had talked more to my grandfather about his childhood, his life in Pennsylvania, his life in the mines at age 11.  I wish I had known more about his parents and relationships with his siblings.  I got snippits, of course, and can visualize a bit but I wish I had been more aggressive in my questions.  But, I am thankful for what I know, thankful he was my grandfather and such a big part of my life and thankful for the things I learned from him.  I miss him to this day.

Oh, by the way, I still have the little drop leaf table.

I miss you PaPa.

A lovely post for All Saints Day. It shines through just how you miss him. God bless!

The mines at 11 years of age--I can't imagine. It sounds as if he had a great strength of character. I hope you sit at the table and have tea and Welsh rarebit from time to time in memory of him. A very touching post.

Mary and Bonnie -- that was such a simpler time. My mom and I would walk around the corner almost everyday and see them. I remember the feel of their house, the smell of it, the colors. I should post some photos. Bonnie -- actually both of my grandparents were employed at 11. My grandfather in the mines in Scranton and my grandmother in a store -- I think it was an emporium sort of place -- in downtown San Antonio. It was called Sol Wolfson's. At some point -- before age 16 -- my grandmother went to work for the telephone company as well. She married when she was 16 and moved all the way to Scranton, PA to meet her newly mustered-out husband. My goodness, when I was sixteen I sure wasn't grown up enough to be married -- I never worked as a teenager either. She was a strong woman.

I'm so glad you have that table! I've always wondered what happened to it. Hard to believe that tiny space was actually considered an "eat in" kitchen. It was very cozy.

Yes, I have the table and all the chairs -- we even managed to get two back from Uncle Jim before we moved. There is one leaf on the table missing -- it was removed -- I assume to get the table closer to that wall in the cozy kitchen. I can't even tell you how many coats of paint are on those pieces. We tried to strip one of the chairs and it didn't go well. But, I have them.