It is cold and raining.  My allergies are bothering me and I have had a headache for days that I can't get rid of and it is just time for winter to go away.

So, what does one do with her time under these circumstances?  Nap? Not yet but maybe.  Craft?  Of course.

I got some advice from my friend Mary that I have tried to apply to these latest offerings.  I also decided to try to use up some scraps instead of just throwing them away -- it is like fabric, scraps are still yardage and cost money.  So, I decided to try some color combos that are non-traditional and to work on my clean an simple approach to cards.  I have put these away for future use and I might add some embellishment later but for right now, this is what I have.


So,  this is what I have been doing all day.  Now it is aspirin and nap time!

Well, we ALMOST made it!

It is disease season here in Funkytown.  Apparently the Disease Devil descended upon St. Elizabeth's School this week and I believe almost one whole class is out.  Yes, it would be Bean's class.  I am not sure of the state of the other classes as there hasn't been an official statement to my knowledge but I can only imagine. 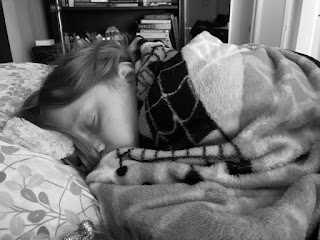 This is what a flu and strep combo looks like.  Oddly she hasn't had a great deal of temperature but a trip to the good doctor, and a traumatic throat swab, revealed that she is positive for both flu and strep.  And yes, she had a flu shot.

And it is cold and going to rain.

How miserable is that?

I think her teacher is going to have a free work day because I think at least half her class is out with something or the other.

And have I mentioned that I hate winter?