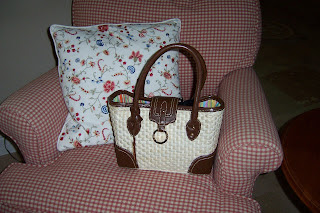 Remember the days when we looked so forward to getting a new straw bag for spring? Well, it has been years since I have had one -- probably high school. So, I went out looking for one and found one that works perfectly for me! I am so proud of it -- plus, it was on sale so even MORE perfect.

I am now participating in several reading challenges -- Young Readers, Romance Readers, Miss Read and my own personal goal to see how many books I can read that aren't on either of the above lists! And, of course, the Ultimate Challenge -- to finish "London" sometime in my lifetime.

So, I just thought I would take a break from all this reading to show you the Perfect Spring Straw Bag!
at April 18, 2008 1 comment: 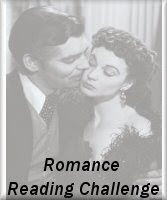 On April 1, 2008, The Bookworm officially began the Romance Readers Challenge. The only rules are that you have to read five books in 2008 and they can be of any time period or style -- Harlequin, historical romance, modern romance, Jane Austen, chicklit, as long as there is a romance between the two main characters.

This sounds like a light-hearted challenge and one I could take on -- five books doesn't seem to be much.