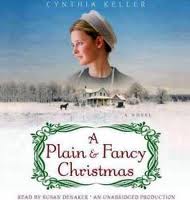 Clearly I am doing better in 2012 with this reading challenge than I did in 2011.  I just finished my second book -- in 2 days.  That is a record for me, I usually read very slowly. Maybe I won't have such a dismal showing in 2012!

"A Plain and Fancy Christmas" is the second book I have read by Cynthia Keller.  I have read many Amish-related novels over the years, mostly by Beverly Lewis, but these by Cynthia Keller are a bit different.  In this book Rachel Yoder, a young mother born and raised into the Amish community, and  Ellie Lawrence, a young woman of the same age, born and raised in New York City, find themselves in a seemingly impossible situation, forever linked.  It all starts with a letter they both receive and their reactions to the letter and subsequent actions change both of their lives, and those of their families, forever -- and possibly for the better.

I am not going to tell you the story because I don't want to spoil it but I will say that it is a page turner.  There is a small bit of mystery involved although it is dealt with, in its entirety at the beginning of the book so it isn't like you are waiting to get through the book to see "whodunnit".  You know from the beginning and, actually, then the real mystery begins.

I would recommend this book to anyone who enjoys Amish fiction.  I don't know why I do, but, I do.  Cynthia Keller, in both her books, use the plot to compare and contrast the Amish way of life to the English way of life and the good to be had from both.  In the end, each group learns something from the other -- they aren't one-sided and preachy -- they are good.  Try it!
at January 11, 2012