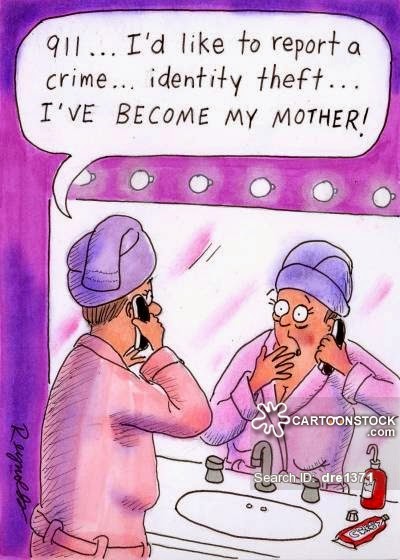 Yesterday my daughter was telling us of some comments one of her students made to her.  The student told my daughter that she couldn't believe she was in her mid-thirties because she didn't act like it! My daughter took that to mean that the student thought she was immature.  The student assured her that wasn't what she meant but she didn't particularly elaborate.  We went on to discuss how I saw my daughter and I told her that it was probably her physical appearance that brought the student to that decision and not her behavior because my daughter doesn't look much older than she did in high school.

So, I couldn't leave it alone, could I?  I had to take it one step further, didn't I?  I had to ask -- "do I seem old to you"?  Her answer was -- "no -- well, yes, sometimes".  Hmmmm.......I think I need further clarification from her.  Is it my appearance?  Well, I am sure I look my age -- well, maybe not QUITE my age but not far from.  Is it my clothes?  Well, we do tend to differ in clothing styles.  Is it my attitude -- ok, every once in a while I open my mouth and my mother pops out -- I will agree but my mother had those attitudes when she was far younger than my age.

I don't think I have "old" habits or mannerisms (and I absolutely loathe the color lavender).  I read a lot of the same books as my daughter and I still listen to rock and roll music -- current stuff as well as "oldies" (there is that word again), we watch the same movies and I am pretty current on pop culture -- I mean if those Kardashian girls were mine they would be so grounded!  I will admit to complaining about my joints hurting but then, they hurt when I was younger than my daughter is now.

So, what makes us appear a certain way to other people?  Is it just because she knows my age or maybe if she feels older then I must be much older.  I don't know.  I look at people like Stevie Nicks, who is a couple of years older than me, and yes, she has aged very well in spite of herself.  In person I am not sure what she would look like but on television she looks pretty darn good.  I can't even comment on the recent media flurry of Christie Brinkley's appearance.  So, does this mean I should cut my hair so I don't look so much like a bag lady or maybe make it blond?  More makeup?  Yuck.

I think I need to have more conversation with my daughter.  Or should I?  Hmmm...slippery slope, there, slippery slope.
at April 08, 2015

Old is ten years older than I am now. It always has been.

No children to tell me either way...I'm just thankful the cats can't speak!
Jane x
PS I took it that the pupil meant your daughter was 'cool'.

Mary -- that sounds like a good rule of thumb -- I think I will adopt it!

Jane-- I think they think she is cool as well but she has reached that age where she is a bit sensitive. I told her should could be sensitive when HER daughter is that age! I doubt your cats would think you were old -- they probably just think of you as mommy.