Look quickly because before too long it is going to be a thing of the past.  I am not a gardener.  I never said I was.  It wasn't part of the marriage contract.  And now I have gimpy knees.

My husband used to tolerate yard work but never loved it.  I think it was forced on him so much as a child that he really has no use for it.  If we could have an apartment with a woodworking shop he would be content.  I don't blame him.  So, when we moved to this house in 2005 he was thrilled that the HOA dues included mowing of both the front and the back yards.  That was especially good for us because we have one of the biggest lots in this garden home community.

Well, somewhere around 2007 we decided we needed something besides just grass.  Now, let it be said that I am fine with just grass but it was a little plain with just grass and a wood fence.  Stark is probably a better word.  So, we called in a landscaper and had a good deal of work done.  We extended the patio and had quite a bit of greenery put in.  It was lovely and it was all LITTLE.

Over time we have lost some bushes, some have been damaged in the weather and some things we just lost interest for.  We have replaced, changed and added new stuff.

The ongoing problem involves a vine -- well, two actually.  One must be called "ouch, damn" because that is what my husband says every time he tries to pull it out because the thorns are rather big and painful, even through gloves.  We don't know the name of the other one so my husband has not so fondly nicknamed it "Treacherous".


Neither responds to any sort of removal technique.  They are prolific and have grown in and around and over everything.  Keeping this huge flower bed has become a complete nightmare.  Now, if we lived in a more temperate area where gardening could be more or less a three season activity it would be one thing but here it is too extreme and the gardening season is actually pretty short unless you want to completely die in 104 heat trying to wrestle with Ouch, Damn and Treacherous.  Neither of us like to do that so we are going to have to do something else.

We talked about just removing everything except for the holly trees and just planting grass again.  I am sort of up with that but I think he hates to do that so we are going to take everything out except for the hollies, crab apple, Japanese maple and hackberry and plant Asiatic jasmine as a ground cover and call it done.  We will be keeping the big rocks though.  I am done with flower pots and hanging baskets and all that sort of thing.  I want to hose the patio down, get a beverage and sit down and just enjoy green.  We will be keeping the big blue pots by the gazebo because they work well with purslane.


While I was out giving direction (haha!) I was looking around at the rest of the yard.  I am not an outdoor girl so I am usually surprised by what I find out there.  I heard a good deal of chirping -- like an argument -- and saw two female cardinals flying at each other.  When I walked closer each flew into a separate tree.  I think they each have a nest.  Then, I heard more chirping and looked up to see a large male cardinal.  Maybe it was him they were fighting over?  Hmm..


Then, there was a squirrel running amok around the yard and over the fence.  I don't see squirrels regularly as we have no pecan trees around.  If I see them they are only passing through. 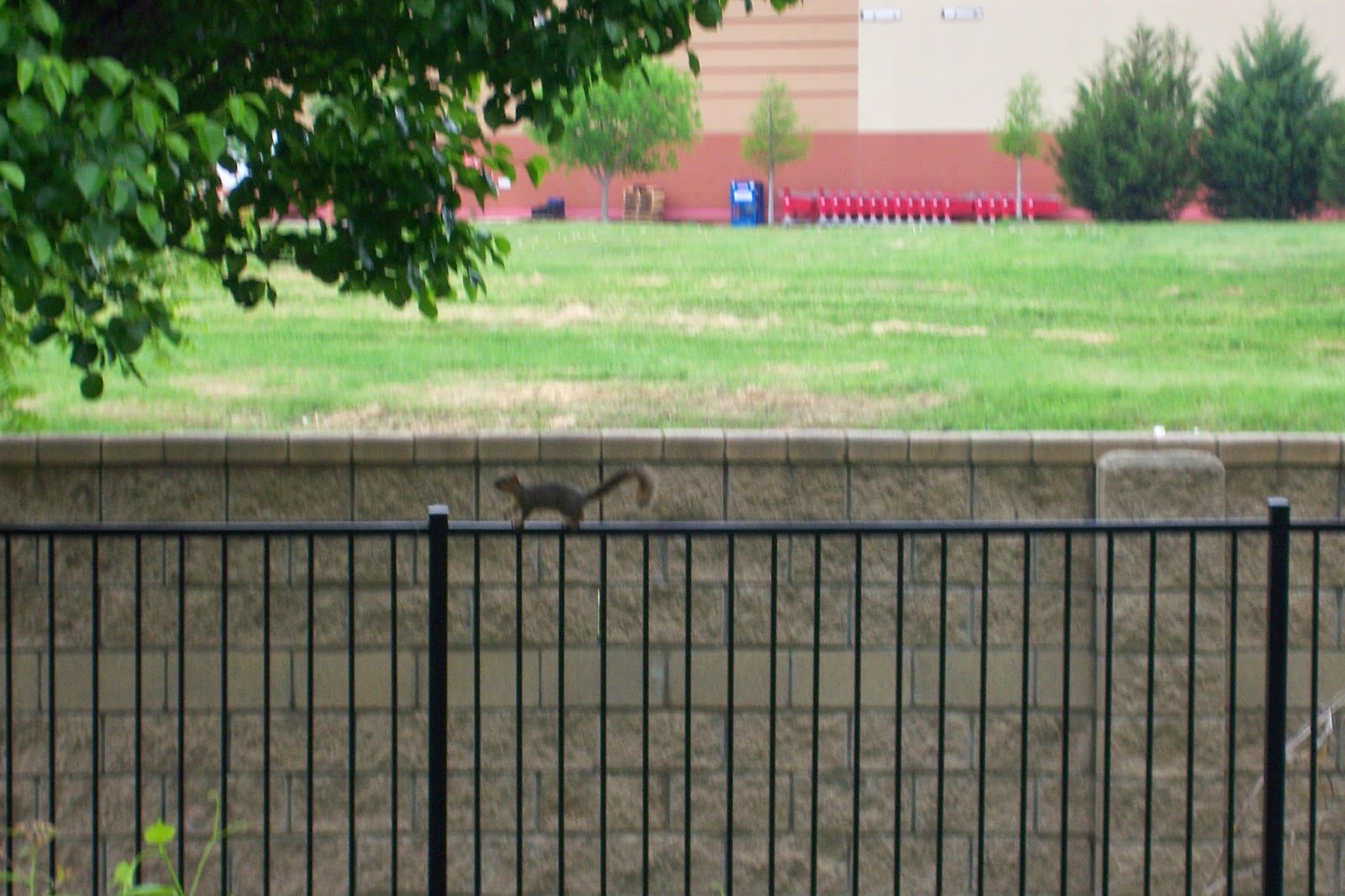 Apparently as my husband was pruning and trimming he found a spot where something has dug under the fence to the property behind us.  I am thinking that is the passageway of the racoons that run through the yard.  We have had racoon, coyote, fox and rabbit in our yard.  However, since they built the apartment behind us we don't get to see those things anymore, just people coming in off the street dumping trash in the dumpster that the developers thought would be well placed right behind my house.  Yes.  Another story.

So, anyway, look closely because I think all of this is going to be history and I can't say as I mind.
at April 17, 2015

The ODT plant looks like a briar of some sort...it's really going for world domination!
Jane x

World domination -- oh yes! Between this and the mint that has gone berserk there is no hope! I am pretty sure we will never get rid of either. Hubs says he is going to inject Roundup into the vein with a syringe! I am totally against Roundup but if he has to inject, I guess he has to -- this stuff has to go!

If those plants aren't named that, they should be--it all sounds fitting!

Your landscaping is very lovely, but it is a lot of work and a big time commitment. Sitting with a beverage and taking in the landscape sounds a lot more my speed too ;)

Bonnie -- we were just outside on Friday talking about redoing the whole spot and then the tree incident occurred so we will be rethinking the entire area. We are going to take almost everthing out and replace it with just groundcover so it isn't nearly so much work. When we moved here my husband was thrilled that the yards were cut for us but this flower bed requires much more work than cutting the grass so we have to do something about it. Poor guy, he just can't keep up with it.