Creeping Up On NYE

I can't believe the Christmas holiday is almost over and we missed almost all of it.  I am feeling some better now but not going to push it.

Tomorrow is NYE and we are supposed to have Bean's First Communion which we had to cancel from Christmas Eve because everybody was sick.  Everybody is better now but we can have ice.  What a thrilling break.

As I said, I am feeling improved but still not wanting to overdo -- I know, that sounds lazy -- so I decided to start a new book even though it is highly unlikely I will finish before tomorrow night to add it to my 2017 Goodreads challenge.  However, it is going pretty well so I might -- we will see.

I chose "Agatha Raisin and the Case of the Curious Curate" to be my quick read.  I love these little cozy mysteries and Agatha Raisin is such an identifiable character.  The character in the book is nothing like Ashley Jensen of the tv show fame and I really prefer the Agatha of the books. 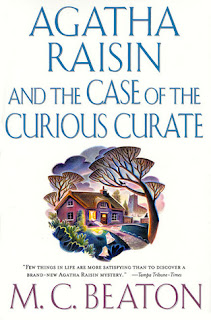 I might have to branch out in the new year and try some of the other cozies out there and I do have the new Jan Karon book to start.  I decided I would wait for the new year for that one though.

I really do enjoy Overdrive -- I really like checking the books out of the library through Amazon and not even having to worry about taking them back.  It is wonderful! And, there are more and more titles all the time.  I am reading this Agatha Raisin book that way and I love it.

So, I guess it is off to find some breakfast.  I can actually feel my appetite returning even though I can't really taste anything.  I have been drinking apple cider vinegar and it is helping but I need it to help a little faster.

I will review the book when I am done.

Christmas Come and Gone -- and Where Were We?

Christmas 2017 has come and gone and where were we?  Well, we were sick with the flu that is having a good go here in Texas.  This is the first year we didn't get flu shots -- we meant to but time just got past us -- and we came down with the dreaded illness.  I am not sure the shots would had made much difference, though, as this year they seemed to be high ineffective.

So, we have spent the last week feeling awful with no energy and surrounded by yet unpacked boxes.  A couple of days ago I felt better than I do today and I did manage to get a lot of boxes unpacked so it is happening -- it is just a little slow.

We were doing pretty well trying to get everything done with moving and Christmas and such -- birthdays have gone by the wayside for the moment though but I will catch up with that -- the recepients know they weren't forgotten-- and then we got sick.

It seems that I have been so focused on either moving or Christmas or being sick that I haven't really thought about reading.

I finished "The Winding Ways Quilt" a few weeks back and decided not to start another book until after the move.  I purchases the new Jan Karon book back when it first came out and I think my new year with start with that.  I am looking forward to it.

I wasn't going to do a Goodreads challenge this year but finally did sign up.  Unfortunately I didn't meet my goal but that is ok because one of the reasons I didn't want to do a challenge to begin with is because I wanted to enjoy the books, not just read for the sake of reaching a goal.  I did enjoy what I read this year and I didn't fall too short -- not sure if I will do another 2018 challenge but rather just keep up with my progress on my own.

So, yeah, we are going to try to finish Christmas up tomorrow and I think I will take the tree down.  It has been a non-Christmas with all the flu and sickness -- the Lost Christmas as my cousin, MLHall refers to it.  Lost indeed.  But, now that it is over, I am ready for spring as I am not a winter person.

Looking forward to the new year with new reading, new projects (going to try to get back to some cross stitch) and new adventures in our new neighborhood!

I Am Sick So It Must Be Christmas

Christmas has never been my healthiest holiday.  This year is no exception.  I am sick.  I feel like I have a really bad head cold but I am running a temp which is going up and down.  It is probably viral.  I am going to try to go to the dr. tomorrow.  I have to be well by Sunday.

Moving is Enlightening -- The Upside to Hoarding

Moving along to the current move from Maison Brinkley to Brinkley Cottage.  We had acquired more stuff, of course, we are human after all.  But, since I have been trying to organize my home more logically things weren't as helter skelter as they were at Wakeland Manor.  I packed like things with like things and labeled the boxes very well.  The movers were great about putting the boxes where they should be.

I didn't pack my kitchen though, until yesterday, and it still isn't done.  I did bring home six boxes of things and have managed to put most away.  Surprisingly, the new kitchen, which I thought was smaller, actually has a lot of storage so I am pleased.  In any event, dealing with the kitchen stuff really makes me wonder what sort of disease I have.

There is no reason for a person to have four cookie sheets, two mini-muffin pans, three regular muffin pans and a miniature bundt cake pan I have no recollection of buying.  It has never been used.  What in the world is wrong with me.

However, hoarding tendencies -- if well, organized and stored neatly -- do come in handy once in a while.  The Bean needs a shepherd's headdress for Thursday.  She doesn't want to be a shepherd but that is another story.  Well, since I am the only person who sews those sorts of duties fall to me and I was stressing a bit since I don't live across the street from Joann Fabrics anymore and all my stuff is packed up in big boxes.

So, I did what everybody does and went to pinterest and noticed a lot of these sorts of costumes are made with towels or just rough cut fabric so I got to thinking.  I like to embroidery cup towels -- the old fashioned muslin sort and I knew I had a package of them.  Someplace.  So, I limped up the stairs, went to the box labeled "needlework" and started rummaging through all the cross stitch fabric and voila! There it was.  A brand new package of muslin cup towels just ready to be transformed into a shepherd headdress.  How will I do that?  Open the package, take it out, place on child's head and tie it on with a random piece of fabric.

Moving -- the Agony and the Ecstacy

We are moving.  I keep questioning this decision.  I am sure I will feel differently when all my possessions (i.e. junk) are under one roof again.  But for now here are my thoughts --

Having to learn a new phone number is not exciting.

Having to pack up everything you own -- a lot of which you have forgotten you have -- is not exciting.

We have lots of boxes -- most of which are books and stuff that goes in the curio cabinet.  We also have lots of dust it seems.

Don't buy books.  Go to the library or get an e-reader.  Same goes for magazines. Books don't have the same value they used to -- and they are so easy to hoard.

If you arrange your home logically then the movers can pack up for you.  If you don't then you run the risk of them whispering behind your back "what is this broad thinking" or "OMG, why does she have this here".  I am sure they don't do that but that is a real fear.

Ok, time to go take the cover off the bed and throw it into the back of the car.  Day 1 went well with the movers and I am sure day 2 will go equally smoothly.  The rest is up to us and I am sure it is going to take days and days and probably not go nearly as smoothly.  I will let you know.

I grew up in South Texas.  We had one major snowfall there in all my life.  We saw snowflakes once in a while but nothing significant.

I now live in North Texas where ice storms are common.  We don't get much snow but more than we did when we lived south.  I can do without both.

Yesterday a major snow event happened over the southern half of Texas from the Valley all the way across to Houston.  The photos are lovely.  I am so thankful I am not there trying to get ready to move.

Be aware the citrus prices will go up because everything they are growing in the Valley is probably ruined.