Yes, it is a conundrum and a quandry -- our home life is all wonky, no routine, no schedule and no groceries.

I don't like to cook or grocery shop.  With all the delivery services, shopping shouldn't be a problem these days and I really should try one but with a major grocery store walking distance from my house, well, it seems sort of silly, doesn't it?

I don't like to cook.  Well, that isn't completely true.  I do like to cook but I am a plain cook and I like plain food and I like vegetables.  The man of the house, however, doesn't.  We have been married 46 years and he doesn't like my cooking.  I don't think he ever has.  It is rather disheartening to stand up on my gimpy, painful knees and cook a meal only to throw most of his away fifteen minutes later and watch him get up and make a snack.

We have also gotten to the age that eating a noon meal is more appealing than a heavy evening meal.  Neither of us seems to digest well anymore and that makes us very grumpy and we don't sleep well.

So, a couple of weeks ago I quit.  I told Mr. that I wasn't cooking anymore.  That we would just eat out and we would eat lunch and he could choose.  I just didn't care anymore.  I don't really have much of an appetite anymore -- I think it is due to a med I am taking -- and you would think I wouldn't have a weight problem but I do.  So, since he doesn't like what I fix, I doubt he would like what eatery I would choose so it is all on him.

That has been our routine for two weeks.  I haven't been to the grocery store either.  Is that bad?

It is when the weather is dreadful and you don't want to go out to the restaurants!  There is nothing in this house to eat.  So, I am re-thinking the whole thing.

While I am not crazy about getting out of bed and starting lunch, I know people used to do just that.  Maybe I should cook ahead but that means "leftovers" which Mr.'s delicate palate can't seem to handle.  Maybe I should just bundle up and head out.

I have no clue.  How could two people who have lived together the majority of their lives be so different?  It is a mystery.

But, in other non-whining news, I have been making cards again.  Here are a few of my latest creations. 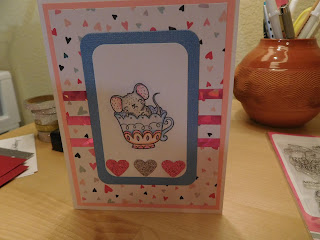 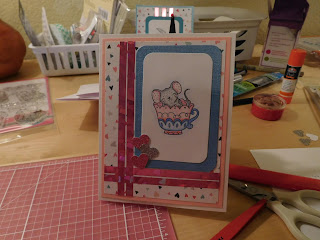 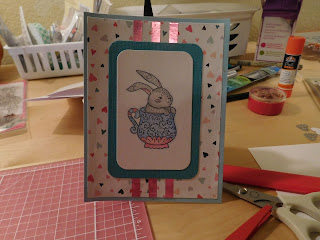 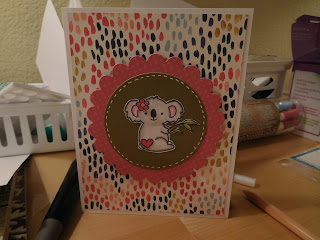 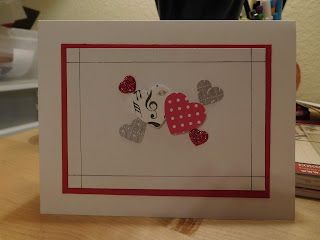 Every time I make a card I sit back and look at what it looks like and how I could have made it better.  The little koala needs more background "stuff" and I will probably remake it with more "stuff" but I think he is cute, just the same.  The teacup mice -- well, those just went really tacky really quickly but I think the recipients will like them anyway.  The music inspired one was pretty much copied from one on pinterest (I think) -- thank you whoever did it for the inspiration because sometimes the creative part of my brain is like a dried up desert.

So, yeah, that has been my week -- hoping this one starts out better.

Sorry that you don't like cooking - for me it's another outlet for creativity but I cook just for me and not for someone who would rather I didn't. Pour the creativity into the cards - they're coming on well.

Thank you! I am having fun with them but I am realizing that I need to think things through a little more. I need to get somewhere inbetween hopelessly plain and overdone tacky! I will get there though -- went through the same when I made quilts! Yeah, the cooking is a real problem. I get tired of having to leave the house everybody to go out to eat. Sometimes, some places are fine but all the time -- it is getting tiresome as well. I think I am going to suggest that he cook! Maybe after that he would appreciate what I do a little bit more.

I don't like to cook either but I do like to eat. I look back on the years I cooked for seven of us ( ground beef seemed to be on the menu a lot and I don't eat meat in general and abhor ground meat). I used to bake a lot of bread and that filled the tummies. I'm fortunate that my DH is not a fussy eater. I make salads and veg side dishes and he cooks his own meat ( in the attached garage since by now I can't even stand the smell of it cooking).

Hi, Granny M! I am not a huge meat eater either. I am making tacos tonight an trying to figure out how to NOT eat the meat! I should have cooked some beans! Mine brings new meaning to fussy -- in fact, when we all got married my MIL told all us daughters in law that she was sorry she couldn't make them eat but it was our problem now. If I had only known how bad it could get.

I’m sad that your knees hurt so bad ❤️

Thank you, Pom Pom. I think I will get used to it eventually.